Share Tweet Share Share Share Email In Africa, the pandemic has spurred consumers to make the move to online platforms, and as part of that move, transact digitally with their devices. Sami Louali, executive vice president of Financial Services at Jumia Technologies, told […]

In Africa, the pandemic has spurred consumers to make the move to online platforms, and as part of that move, transact digitally with their devices.

Sami Louali, executive vice president of Financial Services at Jumia Technologies, told Karen Webster that the shift is firmly ingrained, where individuals now more than ever are becoming used to browsing, clicking and buying the most basic staples of everyday life.

The company operates as an eCommerce platform in Africa, and that marketplace operates in tandem with logistics operations and JumiaPay, which facilitates payments across the ecosystem.

The conversation came against a backdrop in which the company reported earnings that showed that JumiaPay, its digital payments offering, represented 26 percent of gross merchandise volume (GMV). In the latest quarter, JumiaPay transactions increased 7 percent year over year. Typical transaction sizes declined a bit, and Louali pointed to the fact that consumers are shifting their focus to what might be termed “everyday purchases” — think “fast moving consumer goods” (FMCG) — where previously they had been buying electronics spanning smartphones, tablets, laptops and the like.

There are some challenges still in place for the great digital shift to be as pervasive as it might otherwise be. Internet availability and data costs are still hurdles, he said. Elsewhere in the world, unlimited data plans are the norm, while Africa has been progressing toward that threshold.

The consumer embrace of FMCG means that Jumia will be placing more emphasis on building out its logistics operations, as buyers want groceries delivered same day with ever-narrowing windows. Buying groceries online also is giving a tailwind to the adoption of JumiaPay — prior to the pandemic, people would have gone to brick-and-mortar locations, stood in line and paid cash.

“We’ve adapted logistics to these newer categories and product mix,” said Louali, who added that delivery times have been shortened to within a few hours.

In other verticals, the shift away from physical transactions to online ones has been significant. Within the travel vertical, said Louali, consumers no longer want to visit agencies to book and buy tickets for their trips.

JumiaPay had initially been marked by what Louali termed a “blended” checkout across online and offline channels. But now, he said, “you can pay for your airtime, your bills, you can access financial statements” — embracing not just payments but financial services as well.

Looking ahead, he said, the company will seek to target buy now, play later (BNPL) and QR codes (for offline transactions) as a “big priority” to help boost transaction numbers.

Because the firm operates mainly as a technology services provider, it has been outsourcing its logistics component.

“We have a vast network of warehouses, pickup stations and drop-off locations,” he told Webster.

The firm has also cemented relationships with hundreds of logistics service providers that have connected to the platform and are specialized in certain parts of the last mile. The density of the network has been increasing, which makes it more efficient, he said.

As the platform gains scale and reach, there’s a decidedly strong demographic profile in place. He said the median age in the areas Jumia serves stands at roughly 19 years old — the generic Jumia customer is around 20 to 25 years old — and where the population skews that young, they are tech-savvy.

Drilling down a bit, he said that roughly 50 percent of the customer mix comes from tier 1 cities, another 25 percent from tier 2 cities and the remainder from rural areas.

As with any eCommerce platform, said Louali, building trust is paramount in the bid to make Jumia a mainstream part of eCommerce. Customer service is important, and Jumia maintains 24/7 support and performs quality checks on all products sold on the platform. It also promotes a liberal return policy.

The company has been making the platform more attractive to sellers by connecting merchants to financial institutions (FIs) as they seek working capital and credit. Jumia is not acting as lender, said Louali, but is providing the information so that the lender can make a decision, and Jumia is also “facilitating the credit scoring, the distribution of the loan, and the collection.”

Drilling down into the mechanics of lending services, he pointed out that there’s micro-loan service (where loans are between $40 to $50) and the underwriting takes place in real time.

“You can get the funds in your bank account in less than 15 minutes,” he said.

The other offering is a small- to medium-sized business (SMB) lending marketplace — most of the firms are selling electronics — that has average loans for sellers spanning $2,000 to $3,000, with six- to 12-month duration. Of that offering, he said, where Jumia is in four markets, loan growth has been more than 90 percent across the most recent periods.

The loans are being used to help SMBs accumulate more inventory or even make their first forays into digital commerce, he said.

Overall, the fact that consumers are now armed with the devices that help them log into and use Jumia’s eCommerce offerings “has been very positive because it keeps on boosting the use of the platform,” Louali told Webster. “They’ve been transacting more often.”

Mon May 17 , 2021
Tessa Benzinger likens her own business model to that of the classic American milkman, utilizing reusable bottles rather than disposable plastic ones. Instead of selling milk, however, Benzinger deals largely in home and body products. The sign in the window describes Walking Lightly as a Refillery & Zero Waste Shop, […] 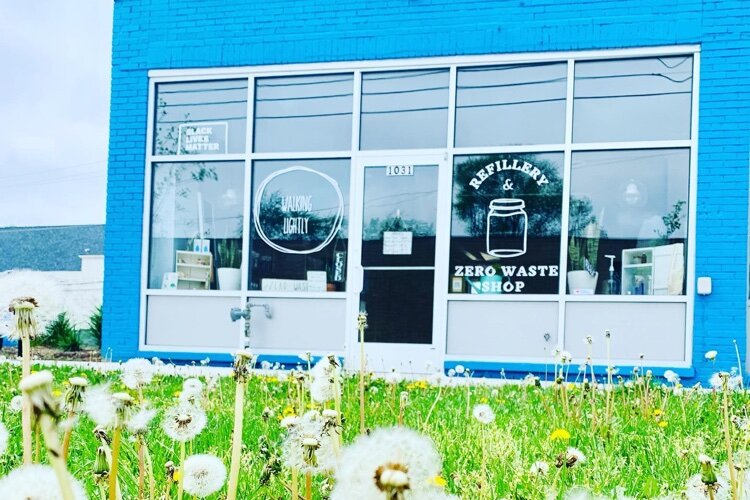