LOS ANGELES, May 19, 2021 /PRNewswire/ — Social Gloves: Battle of the Platforms, a blockbuster boxing and entertainment live pay-per-view (“PPV”) event featuring the biggest names in social media, announced today major new music performances and talent appearances for its June 12 spectacular and a custom-designed sneaker during a press event in Los Angeles:

“It’s going down at Social Gloves on June 12, and I’m excited to be a part of it. It’s great to see all these YouTubers and TikTokers putting in the hard work to prepare for these fights,” said Lil Baby. “We are bringing big energy to Social Gloves. I’m looking forward to this day, and I’m sure fans won’t be disappointed.”

Taking place at the Hard Rock Stadium in Miami Gardens, the historic live PPV event will be produced and distributed by LiveXLive Media (Nasdaq: LIVX) (“LiveXLive”), a global platform for livestream and on-demand audio, video, and podcast/vodcast content in music, comedy, and pop culture, and owner of PodcastOne, Slacker Radio, React Presents, and Custom Personalization Solutions. Tickets for in-person seats at Hard Rock Stadium are on sale now to the general public at Ticketmaster outlets and online at www.ticketmaster.com. LiveXLive early bird PPV livestream packages are on sale now at socialgloves.livexlive.com.

Social Gloves: Battle of the Platforms is executive produced by social media visionary and elite Hollywood playmaker Paul Cazers and is the first in a series of major upcoming Social Gloves events planned in partnership with LiveXLive. Cazers is the mastermind behind the Logan Paul vs. KSI 1 fight, putting the digital entertainment leader at the forefront of the social media boxing craze disrupting the sport today. Paul vs. KSI, which sold out Manchester Arena in England, still holds the record for the most purchased pay-per-view broadcast for any non-professional boxing match of all time.

“Social Gloves is a pioneering pop-culture event bringing together sports, music, fashion, NFT’s and culture. Fans will experience entertainment like never before both in-person at the stadium that hosted six Super Bowls and via the PPV livestream. Social Gloves is the perfect example of the LiveXLive flywheel in action – listen, watch, engage, attend and transact, said Rob Ellin, CEO and Chairman, LiveXLive.  “We are thrilled with the caliber of the music and creator talent, the incredible global reach of the social influencers and the many many surprises we have planned for our audiences across all platforms”

“Just when you thought Social Gloves couldn’t get any bigger, we’re bringing Migos and Lil Baby, the hottest hip-hop names in the game today, on stage for explosive performances,” said executive producer Paul Cazers. “Fans have already been going crazy for the fighter fan club presale tickets, and we expect the buzz to continue to grow leading up to fight night. Social Gloves is truly going to revolutionize how music, social influencers and sports interact, and we are just getting started.”

While on Hard Rock Stadium property, masks are required for all guests (age 2 and up) at all times, other than when actively eating or drinking, Guests must follow all stadium policies, including health and safety policies, and posted instructions while in the stadium and on stadium grounds.

Hard Rock International (HRI) is one of the most globally recognized companies with venues in 68 countries spanning 239 locations that include owned/licensed or managed Hotels, Casinos, Rock Shops®, Live Performance Venues and Cafes. HRI also launched a joint venture named Hard Rock Digital in 2020, an online sportsbook, retail sportsbook and internet gaming platform. Beginning with an Eric Clapton guitar, Hard Rock owns the world’s largest and most valuable collection of authentic music memorabilia at more than 86,000 pieces, which are displayed at its locations around the globe. In 2021, Hard Rock International was awarded the Top Employer in the Travel & Leisure, Gaming, and Entertainment Industry by Forbes and also designated as a U.S. Best Managed Company by Deloitte Private and The Wall Street Journal. In 2020, Hard Rock was honored as one of Forbes Magazine’s Best Employers for Diversity and a Top Employer for Women. Hard Rock Hotels & Casinos also received first place ranking in the 2020 Casino Gaming Executive Satisfaction Survey conducted by Bristol Associates Inc. and Spectrum Gaming Group. In addition, Hard Rock Hotels was named one of the top performing hotel brands in J.D. Power’s North America Hotel Guest Satisfaction Study for the second consecutive year. Hard Rock destinations are located in international gateway cities, including its two most successful flagship properties in Florida and home to the world’s first Guitar Hotel® in South Florida, Global Gaming’s 2020 Property of the Year. The brand is owned by HRI parent entity The Seminole Tribe of Florida. For more information on Hard Rock International, visit www.hardrock.com or shop.hardrock.com.

Headquartered in Los Angeles, California, LiveXLive Media, Inc. (NASDAQ: LIVX) (the “Company”) (pronounced Live “by” Live) is a leading global all-in-one streaming artist-first platform delivering premium music and entertainment content and live-streams from the world’s top artists, expertly curated streaming radio stations, podcasts, and original video and audio-on-demand content, as well as personalized merchandise, connecting artists to millions of fans every day. The Company has streamed over 1,800 artists since January 2020 and has created a valuable connection between bands, fans, and brands by building long-term franchises in audio, video, podcasting, pay-per-view (PPV), live-streaming, and specialty merchandise. LiveXLive is available on iOS, Android, Roku, Apple TV, and Amazon Fire, and through OTT, STIRR, Sling, and XUMO, in addition to its own app, online website, and social channels. The Company’s wholly-owned subsidiary PodcastOne, generates more than 2.25 billion downloads per year with 400+ episodes distributed per week across a stable of hundreds of top podcasts. The Company’s other major wholly-owned subsidiaries are LiveXLive, Slacker Radio, React Presents, and Custom Personalization Solutions. For more information, visit www.livexlive.com and follow us on Facebook, Instagram, TikTok, and Twitter at @livexlive.

All statements other than statements of historical facts contained in this press release are “forward-looking statements,” which may often, but not always, be identified by the use of such words as “may,” “might,” “will,” “will likely result,” “would,” “should,” “estimate,” “plan,” “project,” “forecast,” “intend,” “expect,” “anticipate,” “believe,” “seek,” “continue,” “target” or the negative of such terms or other similar expressions. These statements involve known and unknown risks, uncertainties and other factors, which may cause actual results, performance or achievements to differ materially from those expressed or implied by such statements, including: the Company’s reliance on one key customer for a substantial percentage of its revenue; the Company’s ability to consummate any proposed financing, acquisition or transaction, the timing of the closing of such proposed event, including the risks that a condition to closing would not be satisfied within the expected timeframe or at all, or that the closing of any proposed financing, acquisition or transaction will not occur or whether any such event will enhance shareholder value; the Company’s ability to continue as a going concern; the Company’s ability to attract, maintain and increase the number of its users and paid subscribers; the Company identifying, acquiring, securing and developing content; the Company’s intent to repurchase shares of its common stock from time to time under the stock repurchase program and the timing, price, and quantity of repurchases, if any, under the program; the Company’s ability to maintain compliance with certain financial and other covenants; the Company successfully implementing its growth strategy, including relating to its technology platforms and applications; management’s relationships with industry stakeholders; the effects of the global Covid-19 pandemic; changes in economic conditions; competition; risks and uncertainties applicable to the businesses of the Company’s subsidiaries; and other risks, uncertainties and factors including, but not limited to, those described in the Company’s Annual Report on Form 10-K for the fiscal year ended March 31, 2020, filed with the U.S. Securities and Exchange Commission (the “SEC”) on June 26, 2020, Quarterly Report on Form 10-Q for the quarter ended December 31, 2020, filed with the SEC on February 16, 2021, and in the Company’s other filings and submissions with the SEC. These forward-looking statements speak only as of the date hereof and the Company disclaims any obligations to update these statements, except as may be required by law. The Company intends that all forward-looking statements be subject to the safe-harbor provisions of the Private Securities Litigation Reform Act of 1995.

Instagram and Merchbar Work Together to Help Artists Sell Online

Thu May 20 , 2021
Today, we’re announcing that Instagram shopping features including checkout are coming to over 4,300 artists, labels and creators We’re also enabling new features that allow artists to support each other’s work and promote co-created content The COVID-19 pandemic uprooted many aspects of the music ecosystem and accelerated the industry’s embrace […] 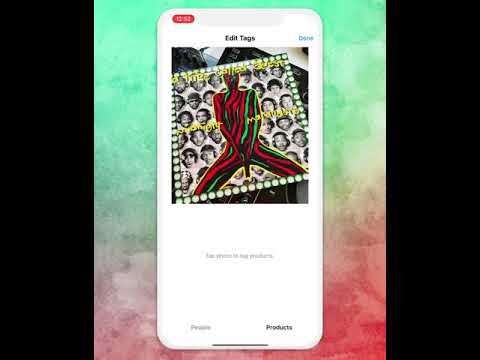