Got an idea for a home improvement product you think would fit on the shelves at Lowe’s? Maybe you believe you have the next viral product but haven’t submitted it to ABC’s “Shark Tank” – or haven’t heard back from the show. Or perhaps you’re not ready to swim with […]

Got an idea for a home improvement product you think would fit on the shelves at Lowe’s?

Maybe you believe you have the next viral product but haven’t submitted it to ABC’s “Shark Tank” – or haven’t heard back from the show. Or perhaps you’re not ready to swim with the “Sharks” and give up a portion of your business.

Lowe’s is teaming up with the reality show’s Daymond John for a new round of “Making It … With Lowe’s,” a nationwide pitch program that will award small businesses grants and the chance to sell their products on Lowes.com and in stores nationwide.

► Save better, spend better:  Money tips and advice delivered right to your inbox. Sign up here

John will host what Lowe’s has dubbed a “second season” of the pitch competition and will advise the finalists.

The first round was held in September and garnered more than 1,300 product submissions. Applications will be accepted for the new round starting Tuesday through midnight PST July 30 at Lowes.com/MakingItWithLowes.

Lowe’s president and CEO Marvin Ellison said in an interview with USA TODAY that it’s about giving diverse, small business owners the “ability to take their products put them on the shelf where we get hundreds of millions of eyeballs in our stores and on our website that can hopefully give them the opportunity of a lifetime.”

The program is geared toward applicants who are members of the LGBTQ+ community, minorities, people with disabilities, veterans and women with “innovative products both in and beyond home improvement categories,” the retailer said.

► Subway free subs:Subway’s new menu comes out Tuesday and there will be a 1 million free sub giveaway

John, the founder of the FUBU clothing line, and has been on “Shark Tank” since 2009. He told USA TODAY that the Lowe’s program is very different from the televised entrepreneurial competition.

“‘Shark Tank’ has been going on for more than a decade and we have an average of more than 40,000 applicants,” John said. “It’s very hard to get on there. It’s kinda like hitting the lotto.”

And even for those who make it onto the ABC show, there’s no guarantee they’ll get a deal. Of the more than 1,300 applicants in the first round, Lowe’s is working with more than 300 of the businesses and John is involved with six.

“If they have a business this is such a great opportunity because there’s literally nothing to lose,” John said. “This is crucial startup money.”

The grand prize winner gets a $50,000 grant. Even for businesses that don’t win a grant, John and Ellison said they believe the entrepreneurs will gain invaluable information and contacts.

Like other retailers, Lowe’s has been working to diversify its suppliers.

Ellison said as one of a few Black CEOs of large companies, it’s important to him “because I understand the challenges that a lot of these diverse, small businesses are struggling with.”

Black-owned businesses and brands have seen more support in a push for social and economic justice in the wake of protests against police brutality and renewed attention to the nation’s decades-long racial wealth gap after protests over systemic racism and the murder of George Floyd gripped the nation last summer.

The pandemic has also proven a critical obstacle for businesses across the board. .

“Even though the economy is reopening, entrepreneurs face extraordinary challenges of getting their businesses back up and going,” Ellison said. “The data tells us that nearly one-third of small businesses in the U.S. were rendered non-operational last year due to the pandemic, and this number goes up to 55% when you put them into the classification of businesses led by women or minorities.”

“We understand that as a large company, we want to be part of the solution,” Ellison said. “We also desire for our suppliers to reflect the unique demographics of our customers.”

How to apply for ‘Making It … With Lowe’s’

Hundreds of diverse entrepreneurs will be evaluated for the opportunity to sell their product on Lowes.com, then 75 suppliers will be invited to meet with Lowe’s merchandising teams to be considered for additional promotion.

Those top pitches will be posted online and consumers will be invited to vote for their “fan favorite” among the top 15 suppliers. The field will then narrow to the five top suppliers and the favorite, who will pitch their products to Lowe’s executives for an opportunity to receive mentoring and a chance to land on Lowe’s shelves and website.

Unlike last year, which was held online, Lowe’s plans to have finalists attend an in-person pitch event at a Charlotte, North Carolina-area Lowe’s store later this year.

Learn more and apply at Lowes.com/MakingItWithLowes.

The Digital Ecosystem Is Changing. So Should The Way Ecommerce Merchants Calculate CAC

Tue Jul 13 , 2021
“Data-Driven Thinking” is written by members of the media community and contains fresh ideas on the digital revolution in media. Today’s column is written by Cary Lawrence, CEO of customer data and analytics platform Decile. We’ve seen an absolute explosion in independent ecommerce entrepreneurship over the past year. But the […] 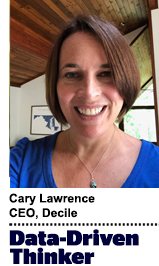